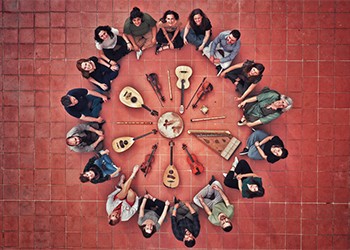 The workshop aims at the acquaintance and study of the theoretical musical system of maqams through the performance and interpretation of Istanbul classical repertoire but also traditional songs of the Eastern Mediterranean and Greece. During the workshop we explore and come in contact with the organology, repertoire, rhythms, ways and improvised forms (taqsim) of this tradition, which will be assimilated through practice itself. All these will lead us to understanding the organization of the system of maqam and consequently to understanding both simple and complex maqams as well as stylistics of their tradition.

Who can participate
The workshop is addressed to anyone who is interested to get in touch with Eastern modal music and the world of maqam, whether he/she plays a musical instrument or not, and wants to form part of and collaborate with a group of both amateur and professional musicians. It is addressed to singers and people playing any instrument, regardless of their level of knowledge, without any restriction.

The Orchestra
In February 2020, the musical ensemble TERPSIS (Terpsis Orchestra) was formed as part of the workshop.

Its object of inspiration, study and performance are works of Istanbul classical repertoire  and the tradition of maqam but also traditional songs of the Eastern Mediterranean and Greece.

Terpsis Orchestra is a music group whose members are united by their common love for music, collaboration and the search for new sounds and is open to embrace anyone who wants to join in!